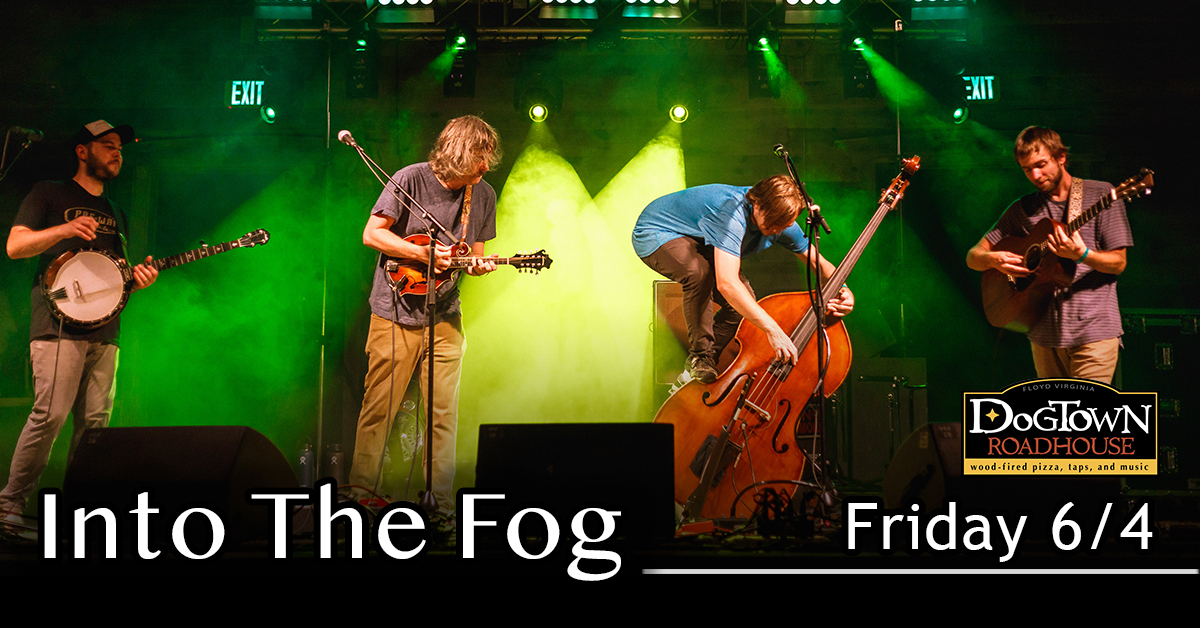 $3 Live Music Contribution Cover ~ Join us for a genius musical melting pot of sounds in an acoustic/newgrass setting!

Into The Fog is a genre-jumping string band located in Raleigh, North Carolina. With its members having various backgrounds ranging from bluegrass, country, rock, to funk, Into The Fog creates a musical melting pot of sounds in an acoustic/newgrass setting. The band is made up of Brian Stephenson on Vocals and Guitar, Winston Mitchell on Vocals, Mandolin and Dobro, Derek Lane on Vocals and Bass, and Michael Malek on Banjo. The original iteration of the band was formed in Wilmington, NC late in 2017 around an opportunity to play in the band competition for the prestigious Telluride Bluegrass Festival. That cross country trip was recorded by friend of the band and videographer Mason Godwin in his documentary Band #7:The Ride to Telluride.

After the Telluride trip, the band’s lineup restructured around the trio of Stephenson, Mitchell, and Lane. In November 2018 the band went to a cabin outside of Waynesville, NC and spent a week recording their debut album Wishin’ It Would Rain, which was released on February 22, 2019.
“The trio crafts a dynamic mix of songs and sounds, from the gypsy feel of “Caawphonation” to the running-from-Johnny-Law feel of instrumental “Cedar Island Rendezvous.”- Brian Tucker(Star News)

The trio went on to play over 175 shows in 2019 making a name for themselves by frequenting breweries and venues throughout North Carolina and Virginia. By August they were looking to round out their sound as they were transitioning to higher profile gigs, so they added Michael Malek as a full time banjo player. Since the addition of Malek, they have gained momentum through festival performances like Shakori Hills, Groove in the Garden, and The Ol’ Front Porch Music Festival, along with opening slots for acts like Jon Stickley Trio and Sam Bush Band. With their 14 track sophomore album Runnin’ Blind and Chasin’ Time due out in May of 2021 they are looking to make a statement about their sound and gear up for the next chapter of their musical journey.
“While purists might label label their sound as Newgrass, those in attendance respond to the gospel they are preaching and seem perfectly content with the foggy genre, since the sound is so clear”- Donna Davis(The Daily Reflector)