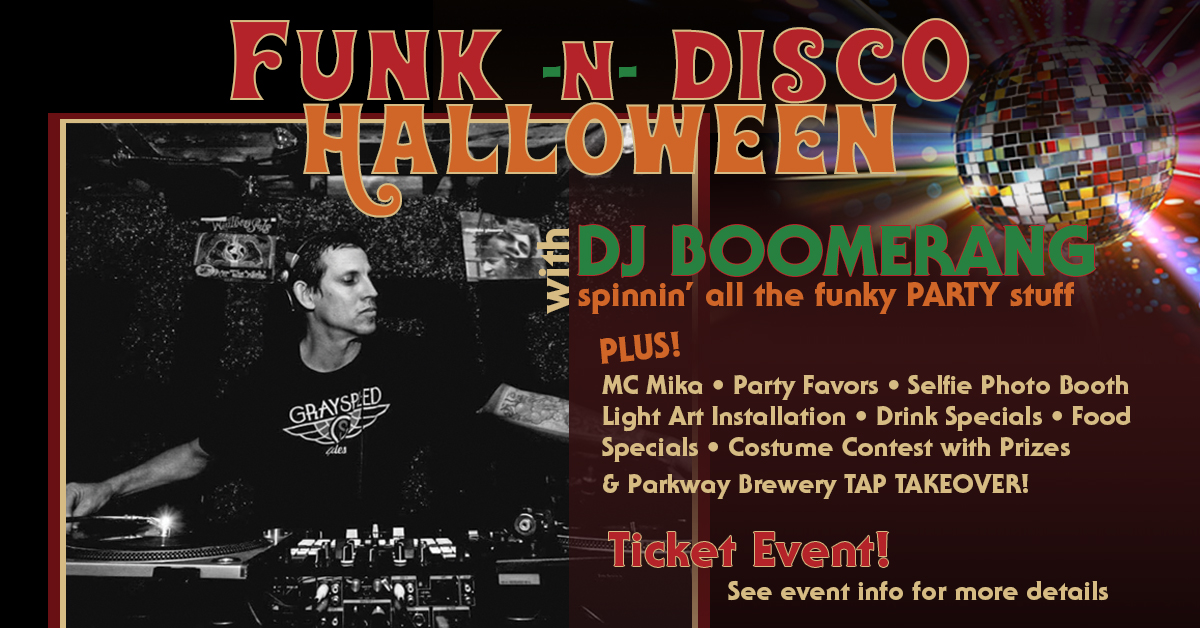 Come on and get funky with us this Halloween! Get dressed up funky disco style and let loose with one of the areas finest DJ’s, and the awesome MC Mika to lead the night! We’re throwing in some extra fun stuff to top it off…

There’s a reason why Michael McNamara is known as DJ Boomerang, in his almost three decades as a DJ, his musical inspiration and his own trail of influence he’s left on others have spanned far and wide, but have always come back full circle to what’s really the source of his creative force: positive, conscious, and uplifting message music. A mysterious, analog soul existing in what’s largely today a digital world, Boomerang still prefers to carry and spin crates of vinyl. While a legendary and influential figure to many, those that were there and know, without much out there in the form of online photos, mixes, or media, these words you are reading are some of the first to capture and put his story out there.

McNamara’s early influences were late ’80s punk rock and golden era hip-hop, groups like Public Enemy, Dead Kennedys, KRS1, and others, that spoke to social and political justice issues of the times, which in our cyclical nature constantly resurface today. Like many, McNamara’s curious spirit would lead him to look into the influences behind these groups: funk breaks, social justice poetry, jazz, and soul, digging a decade back into ’70s artists such as Gil Scott Heron and Brian Jackson, Sly & Family Stone, The Last Poets, Coltrane, Miles Davis, Donald Byrd, Nina Simone, Stevie Wonder, James Brown, Bob Marley and the Wailers, and so on. By the ’90s, the jazzy conscious hip-hop of Tribe, De La Soul, Jungle Brothers, Arrested Development, Spearhead (Michael Franti) combined all of his early influences with an even stronger message of unity. For McNamara, the art form of dance became a liberating expression and a way to “work it out,” leaving societal pressures, stigmas, and barriers behind and offering experiences that serve as a safe space free from judgement and a reprieve from the grind.

It was ’94 in Steamboat, Colorado and Denver that McNamara began DJing, adding more disco, dance-rock, house, and world music to his budding hip-hop, soul, jazz, and funk record collection. The hybrid fusion of styles that would become known as acid jazz would serve as a comfortable meeting point and sonic melting pot for him and his many influences. Forever occupying a space between two worlds, Boomerang would also learn to bridge the gap between the live jam band scene of the mountains and the club/electronica scene of the city. Denver would help shape DJ Boomerang’s love for house, introducing him to Mark Farina, Sunshine and Moonbeam of Dubtribe, Doc Martin, Derrick Carter, and King Britt.

Boomerang would return to Florida in the mid ’90s where he’d become a cultural force in his own right, laying his seeds of influence that would expand across the state. His DJ residencies included The Rubb (the late River Phoenix’ club in Ybor run by his family), which often had 2000 people through the door on weekend nights and New World Brewery, where he was the first live entertainment alongside Jask and started his New World Collective production company. But perhaps his most infamous period would come 2 years later in ’98 with the opening of Budious Maximus in St. Pete, where he would host the likes of Dixon, DJ Harvey, Carl Craig, Three, Jori Hulkkonen, Sadar Bahar, the Idjut Boys, Rasoul, members of the SF Wicked Crew, Rob Paine, and many more for raucous, debaucherous parties.

With the turn of the century, Boomerang’s touch would extend to South Florida with residency at the roaming Aquabooty parties, Nikki Beach, and Chris Blackwell from Island records’ Marlin Hotel, including many golden era years of Winter Music Conference parties. Escaping back into the mountains, Boomerang would move to Canada, specifically Nelson, British Columbia, a hippy mecca of the North West, where he’d wind up DJing the Shambhala Music Festival. His nomadic adventures continued and would take him to an Idaho ski town, holding many residencies and unique events that included an annual Roller Boogie in the park, alongside other outdoor community gatherings and festivals. Eventually he’d make his way back to Florida in 2011 — aside from a brief 2 year stint in San Francisco — where he would reignite the original ethos of St. Pete with his Sunshine City Disco outfit and Open House Conspiracy residency, bringing and collaborating on events with Bosq, Tony Humphries, François K, King Britt, Mystic Bill, Robert Owens, Recloose, Luv*Jam, Rick Wade, and Jus-Ed. His weekly extended sets at a speakeasy style back patio dubbed Exit Bar lead to many nights that would go down in infamy, including winning the accolade of “winner of the late night tiny patio party” from Canadian band, Broken Social Scene, after accidentally bleeding into their set next door at Jannus.

The massive shift that was 2020 has called Boomerang to the mountains again, trading the Sunshine City in for the Star City, making Roanoke, Virginia his homebase. What the future holds? Who knows, but bet any of the many places he’s left his mark could always see him swing back around.